The origin of the phrase Holy Toledo can vary, depending on who you talk to. The most common reference stems from Spain, where Toledo is both a city and providence with a rich history in religion. For residents of the city in Ohio with the same name, Holy Toledo more accurately refers to how this municipality not only handles the problem of waste wood, but turns it into a win-win solution.

This holds especially true in places where the destructive emerald ash borer has struck. The invasive beetle was first discovered near Detroit, Michigan in 2002 and it has since spread throughout the Great Lakes, Midwest, New England and southeast Canada. Toledo was near ground zero for the epidemic, but they were somewhat prepared for the cleanup thanks to a successful recycling and mulch program already in place through the city’s Division of Parks, Recreation and Forestry. 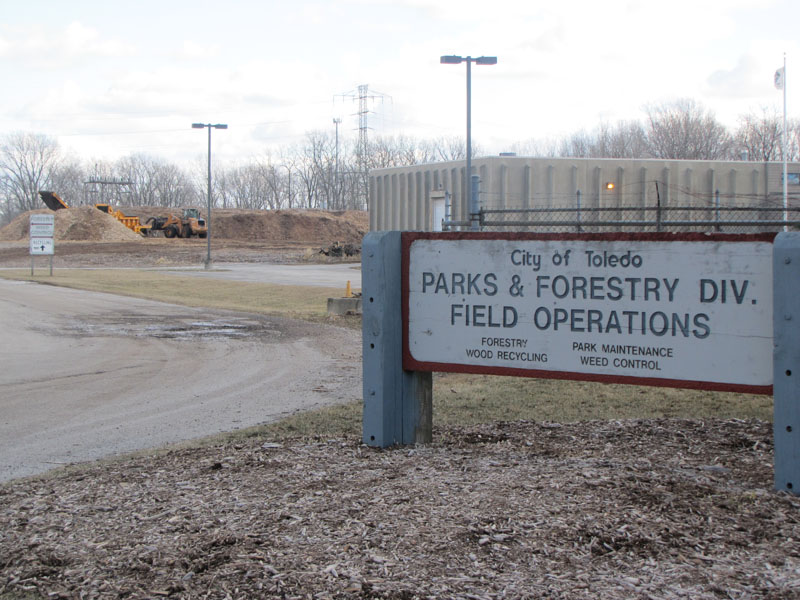 “In the late 1980s we were taking woody material to the landfill,” explained Dan Plath, forestry crew leader and woodlot manager for the city. “With the laws changing we needed to shift away from that so we had to look at other options for dealing with it. Recycling the material into mulch seemed like the most viable option, and actually it turned out to be an inexpensive option all things considered. We tested the waters a bit to see if there was a market, and there was.”

Many cities like Toledo have implemented similar programs for dealing with municipal waste wood, and for good reason. Normal tree care operations in a sizable municipality can yield a considerable amount of material. Factor in variables such as storm damage cleanup, construction/demolition waste or infestations like the emerald ash borer, and suddenly urban waste wood becomes a significant issue. Toledo doesn’t accept construction waste or material from outside companies, but Dan says they still receive on average 100 cubic yards of raw material each day, captured entirely through the city’s own urban forestry operations. Recycling that material creates an abundant supply of mulch for city use, but Toledo also offers mulch for sale to anyone in the area.

“We have three different products that we sell, and anyone can buy them,” explained Plath. “We have what we call our landscape mulch or dark mulch that’s made from the brush and smaller material we get.  For the last few years we’ve been separating the wood chips that come in from our crews chipping on the streets; that gives us a second product with a slightly different texture. And then we have our playground mulch that we have lab tested to meet federal standards for impact absorption.”

When the city implemented this program, they were only running a whole tree chipper. To make the final product they brought in a contractor with a tub grinder, and then they started educating the public on what they had to offer.

“We got into it gradually, starting with some promotional and PR type things,” said Plath. “At Christmas time we were picking up Christmas trees, and we’d explain to people that we’d be recycling them for mulch and that the material was available.”

Our playground mulch is made entirely from logs and we do that—from large logs to finished product—all in one pass.

With the program off to a good start, the city eventually invested in their own horizontal grinder to create the mulch. They started with one of the early Model 3680 Beast recyclers in the mid-90s and ran it for approximately 10 years. With demand for their mulch increasing and more raw material from the emerald ash borer infestation entering their yard, in 2006 they upgraded to a Model 4680 Beast with a 1000-horsepower CAT diesel that the city is still using. The Beast has a 45-inch by 60-inch mill opening, and with the big CAT engine Dan says the machine is well-suited to their operation. They’ve accumulated approximately 2000 hours on the Beast since 2006, and they’re currently running a 1.5-inch diamond screen with shingle fan teeth to make their mulch.

“For our purposes, we’ve found the shingle fans give us a good balance between aggressiveness, durability, and a good product,” said Plath. “To make the landscape mulch we open the gate so it bypasses the screen, and we get a combination of fine and coarse material that we just pile and regrind after at least six months. We turn it once, and the whole process of sitting in a pile darkens it up real nice. Then we close the gate and regrind it, and it gives us a very nice textured material. We age our wood chips the same way and grind it, and that gives us a slightly different, more even texture. Our playground mulch is made entirely from logs and we do that—from large logs to finished product—all in one pass.”

Having a machine like the 4680 allows the city to keep up with demand for mulch, which typically peaks through the spring and summer as one might expect. During this time the workforce in the yard might swell by a few extra people, but for the most part all the duties are handled by Dan and Tree Service Worker Paul Auler. 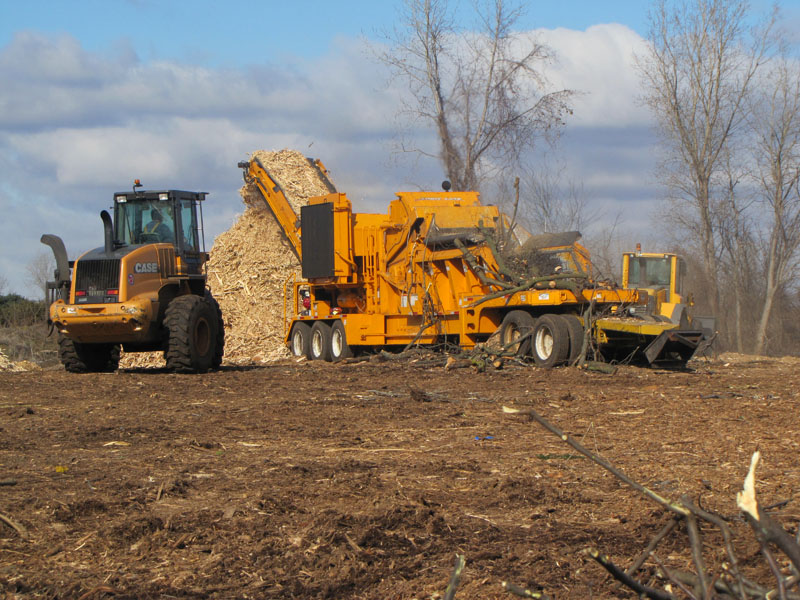 “We’ll concentrate on having our regrind done through the winter so it’s ready for the spring demand,” said Auler. “That will usually last until May or June, and then we’ll grind another batch to take us through the fall. It works out well that way; when the residential sales subside through the summer, the schools will pick our business back up before fall.”

Dan and Paul are the only full-time, year-round staff for their specific department, and they’ll handle everything from processing to record keeping, sales, billing and deliveries. Any person or company in the vicinity of Toledo is able to purchase the mulch, though the majority of their customers are residential. According to Dan, having the delivery service is the “bread and butter” of their business.

“Probably 70 to 80 percent of our sales are deliveries,” he explained. “We will deliver in roughly a 30-mile radius but most orders are well within that area. And we have to be careful being a municipality that we’re not infringing on the private sector. We don’t have any logging industry really close to us so we don’t have that kind of competition. But we’re not so big that we’re taking everything over; there’s still a market for other products but we are at least able to sell what we get in, and we have a wholesale rate for our vendors.” 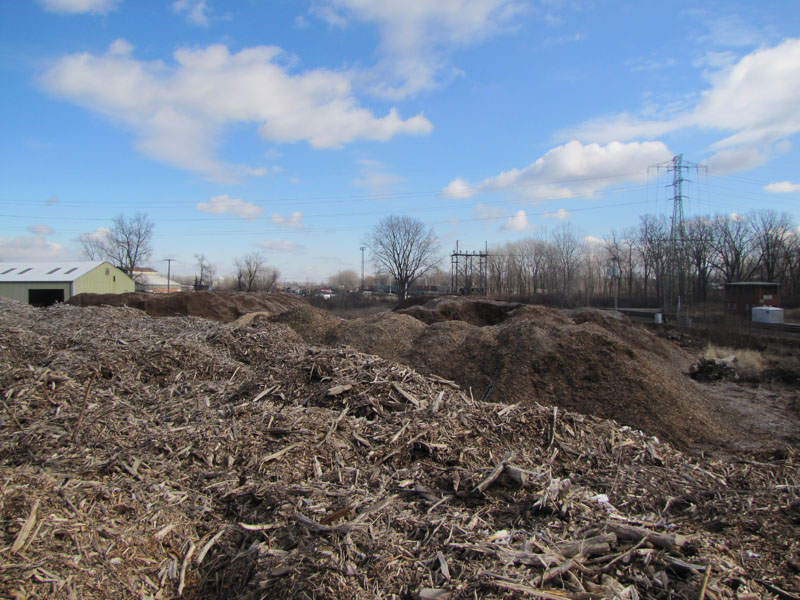 Having the proper equipment and having a plan of action has given the city of Toledo a win-win solution to dealing with waste wood, and it’s a solution many other cities and smaller towns are realizing. Toledo has found great success simply through capturing and recycling waste wood from the city’s forestry division, but having a versatile horizontal recycler like the Beast can open other opportunities for municipal recycling. In other municipalities, the Beast is often utilized for construction and demolition cleanup, processing wood and plastic items. It can also be equipped to grind shingles, creating a hot-mix asphalt supplement that can be used in blacktop.

For cities exploring renewable biomass fuel, Beast recyclers can produce a dimensional wood chip, including a  “bio-sawdust” wood chip as small as a quarter-inch in size. And all Beast recyclers can be manufactured with high-power WEG electric motors for locations requiring zero-emission machinery, or just municipalities seeking an alternative to high fuel prices.

Regardless of the machine or the desired outcome, Dan’s 29 years of experience with the city of Toledo’s Forestry Division has shown him that for any such program to be a success, it’s important to do the research first, then get the proper equipment for the job.

we have a lot of brush and log material, and we’re able to create some revenue with just that while also helping our citizens and our community.

“First, you really need to see what the options are,” he said. “If you’re looking to sell a product, you need to see if it’s even a viable option and what that market would be. It all depends—how much material do you have? What do you want to do with it? We’re just taking brush and log material; we’re not taking yard or construction waste. We’re not doing any composting. Other options might be open to other municipalities. For us, we have a lot of brush and log material, and we’re able to create some revenue with just that while also helping our citizens and our community. I think for any growing community, something like this is definitely worth looking at.”

The city of Toledo has turned a potential wood waste nightmare into a solution that not only recycles their material, but adds a stream of revenue the city can use for reinvestment. Bandit has a full line of Beast horizontal grinders/recyclers that can be configured as towable or self-propelled machines powered by diesel or electric motors.

Contact your local dealer today and start to build your bottom line.